He discovered the proximity of countries close to Bali by dragging his finger around GoogleMaps on his phone. Although he planned to travel Southeast Asia, he is a classic ignorant American and was unfamiliar with its geographical layout. With an expiring Indonesian visa and a time frame of ten days till meeting a friend in Malaysia, he decided Vietnam was the right destination. Utilizing Facebook Messenger to contact a friend who had recently traveled Vietnam for suggestions, he made a short list of cities to visit with his limited time. After consulting Expedia and Skyscanner he determined it would be cheapest to fly to the top of the country and work his way south by bus and plane.

The Californian landed in Hanoi in the early afternoon, alone, with no accommodation or travel booked. Who had he become in the last month? The man who likes to plan suddenly didn’t have one. And what was the most strange about the situation is that he felt comfortable with that plan-less plan.

While waiting for his visa approval at immigration, a conversation with a woman with a slit green dress from Holland found him. “We can split a taxi, where are you staying?,” she asked with a cheerful smile. He explained he didn’t know, and she recommended he book at her hotel for the night. A quick check on the HostelWorld app on the airports free WiFi and he had confirmed his plan to take a taxi with his new acquaintance.

After picking up SIM cards and free candy*, the two took a Grab (similar to Uber) into the Old Quarter of Hanoi. The were dropped “at” their hotel and appeared on top of it according to GPS on their phones, though they saw no signage. Failing to find it after unsuccessfully consulting staff at nearby hotels, they wandered into a cafe at the supposed address and discovered the hotel lobby was on the third floor of the building. Ascending two more flights of stairs, they found their respective rooms and concluded they would venture into the city together for dinner and a drink. 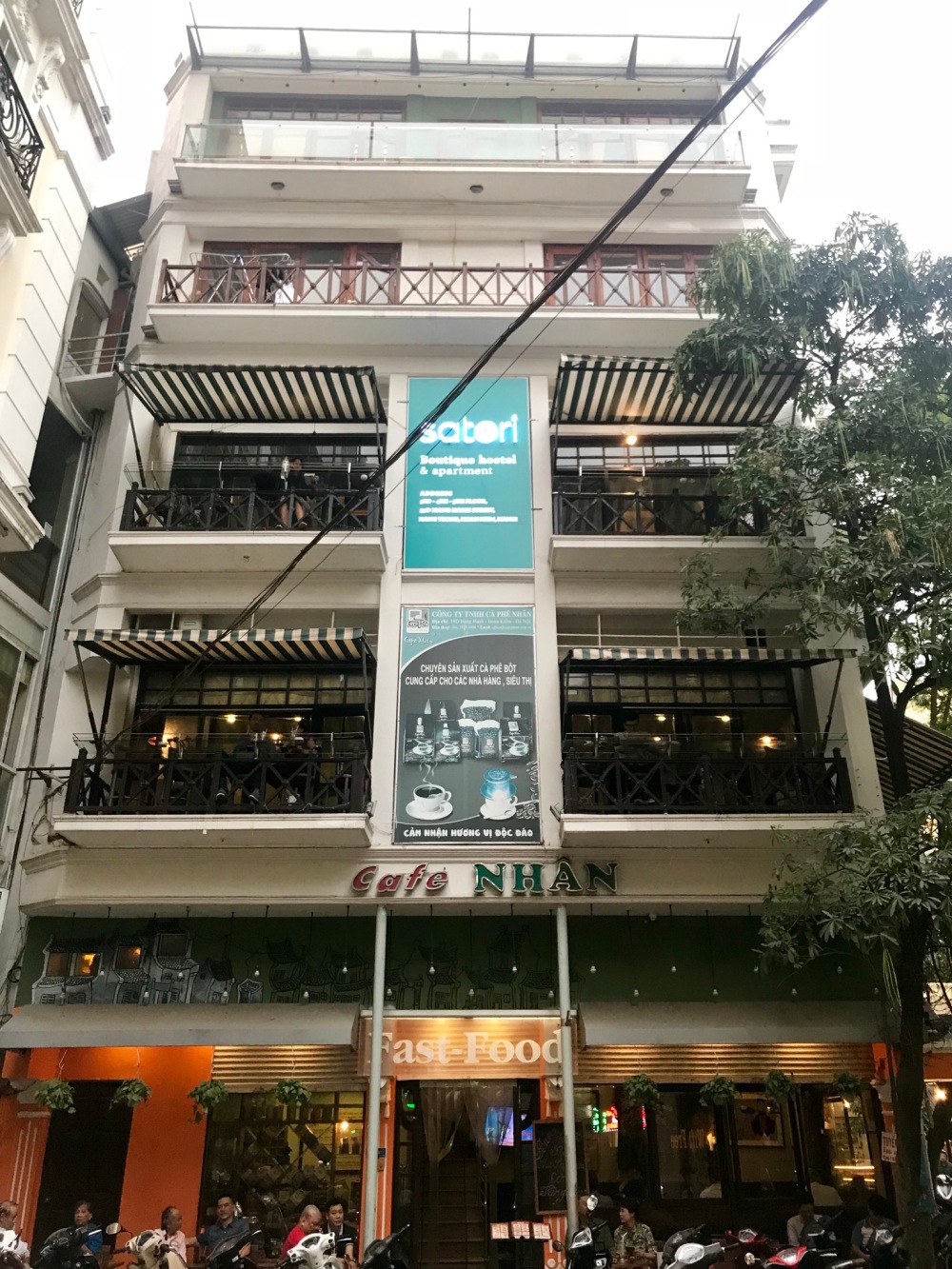 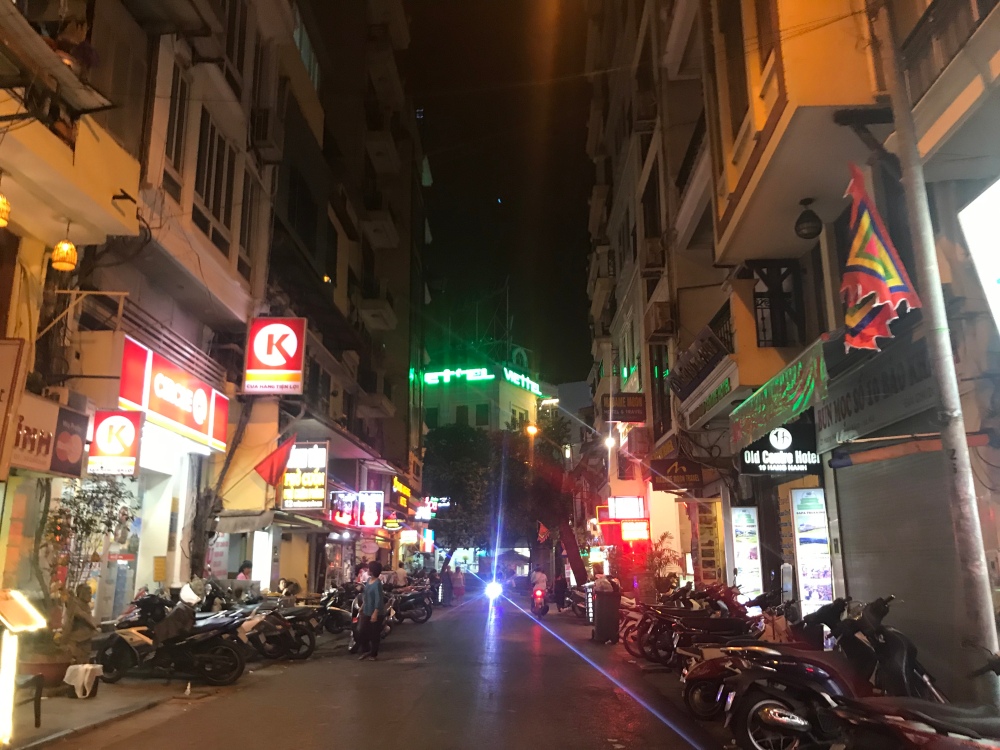 Luck and fate teamed up for his first 24 hours in a country where he knew no one, didn’t speak a word of the language, and didn’t even know the name of the currency. The acquaintance from the airport turned out to be one of those special people with a personality that clicked with his own. Their time together provided comfort through effortless meaningful conversation and joy through a mutual fixation on exploration.

That evening, per her recommendation, he moved out of his comfort zone and ate a (possibly) authentic and (probably) touristy  dish at a venue shoved in among an ally of other eateries and bars. His dish of fried rice served inside a pineapple provided satisfaction on multiple levels—entertainment, tastiness, and visual appeal.  That nights he kept thinking, “I can’t believe I am here. In this foreign place.” The idea of visiting this land had not remotely crossed his mind until 2018, and he was proud his Treventure had led him there. He hadn’t felt proud of himself for a long time. 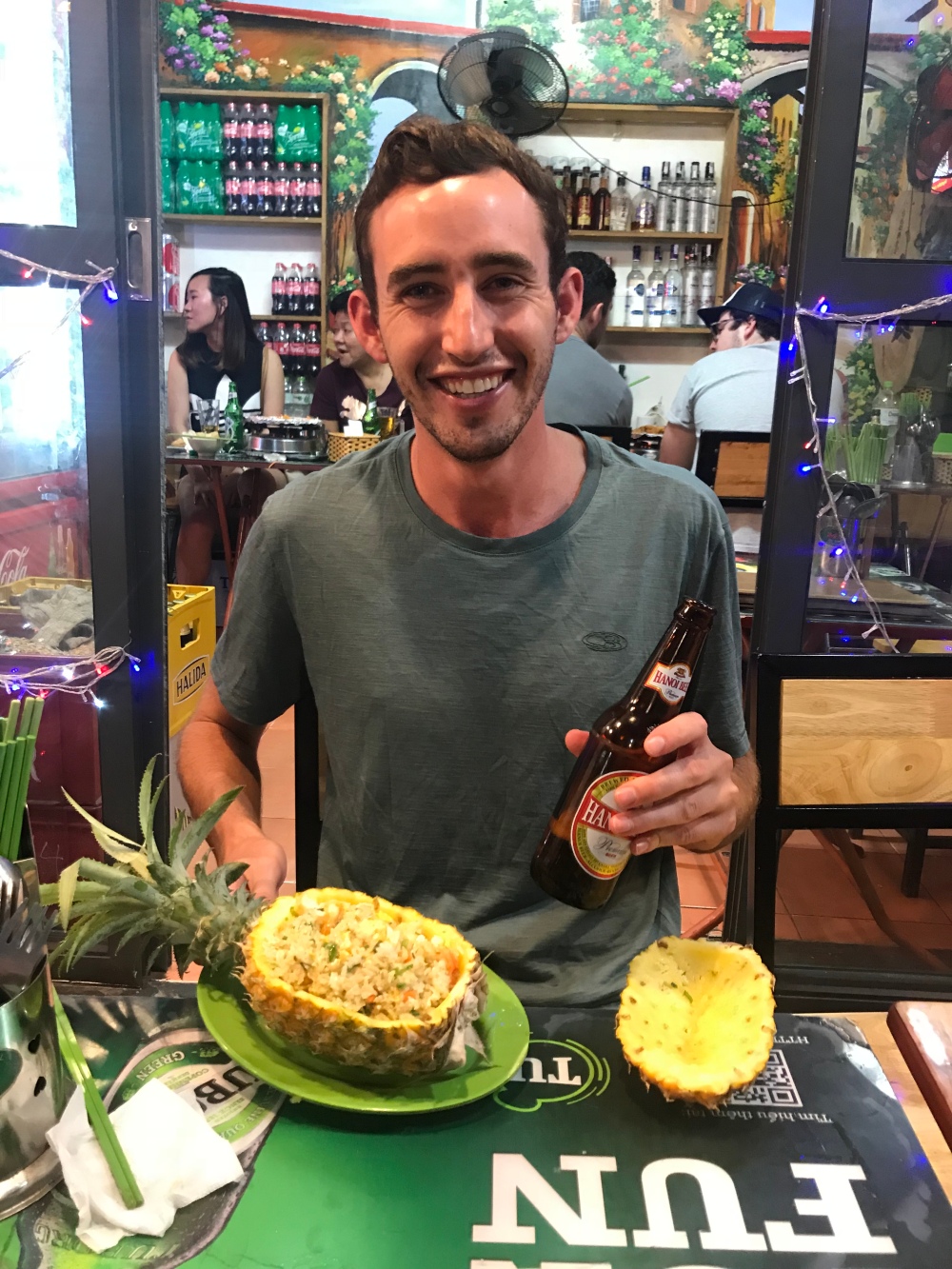 They wandered the old quarter admiring the mishmash of architecture reflected by the influence of different governments over the last 100 years. During the hundreds of years of Chinese rule, there was a law that no building could be taller than the king’s palanquin. Additionally, storefronts were taxed on the width so many buildings are narrow at about three meters wide and very deep, usually about 60 meters. After Chinese rule, for about 100 years French colonists ruled the city which is reflected in French architecture. Then the war in the 1960s destroyed parts of the city due to American bombings. The Old Quarter today is a collection of styles that climb many floors towards the sky. 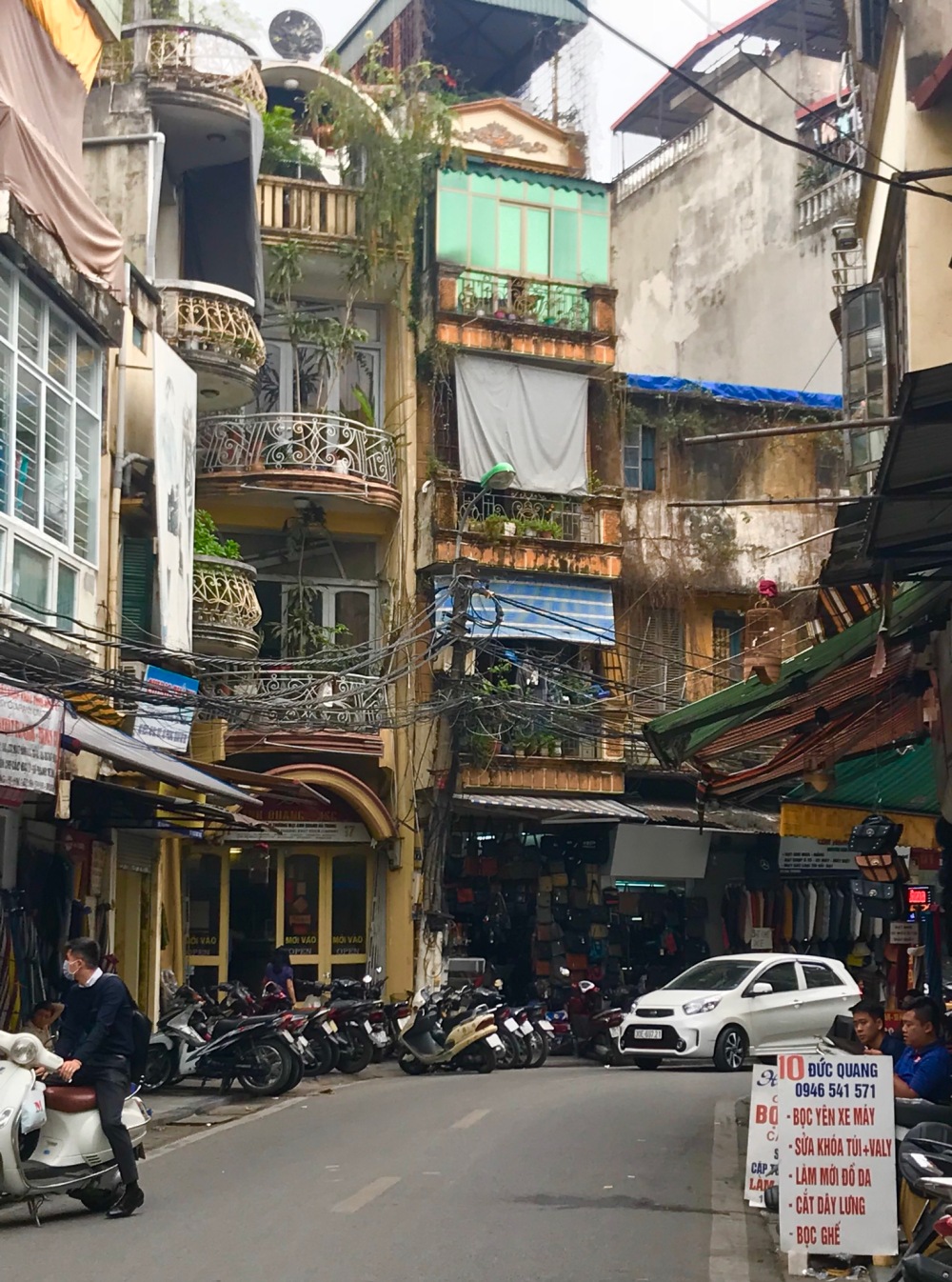 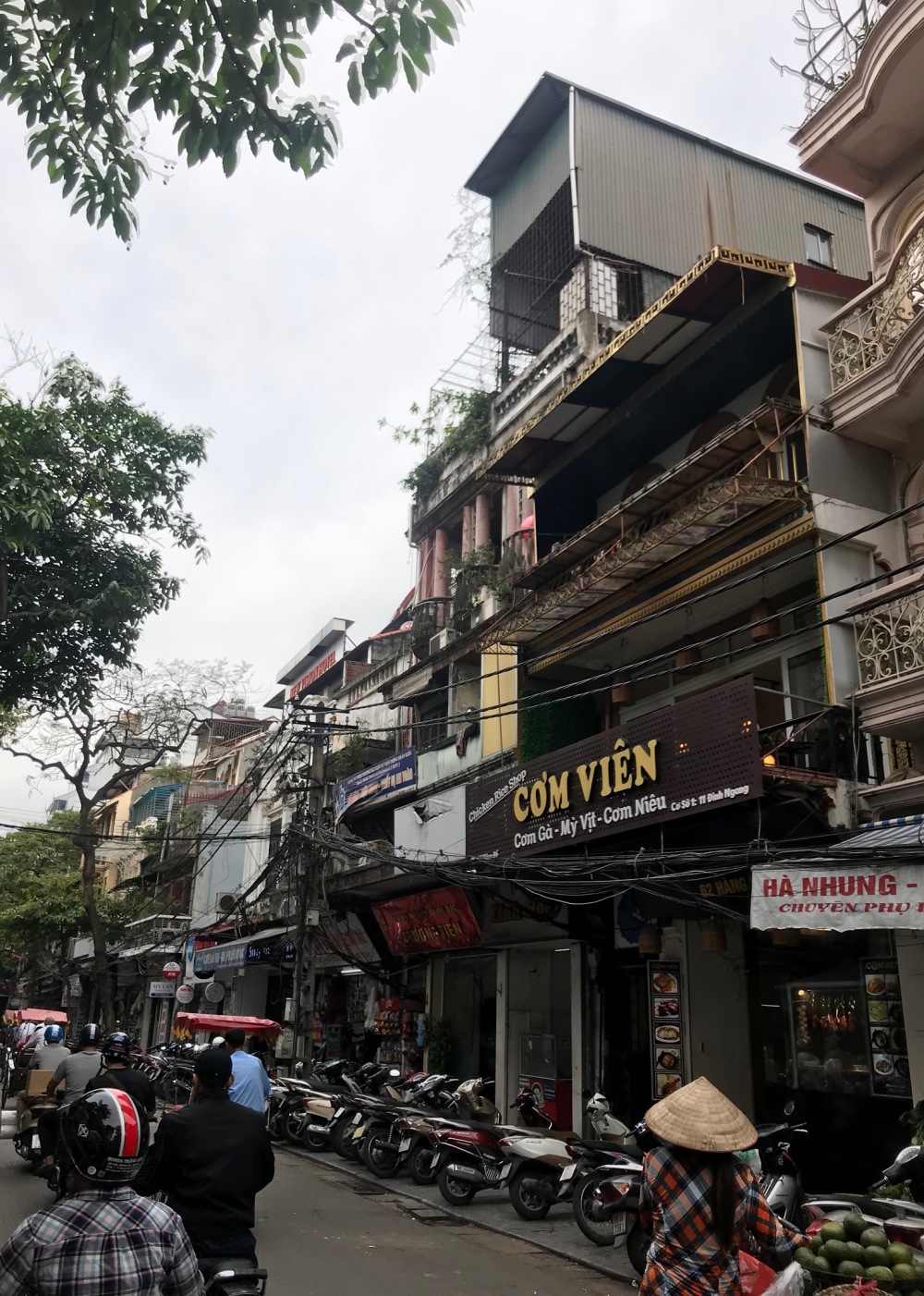 The shopping mecca that is the Old Quarter provides cheap goods and materials along its 70 streets. Like neon lights to draw consumers to a business, The North Face, Fjallraven Kanken, and Nike were featured in many storefronts. Other blocks contained shop after shop of shoes or textiles or trinkets. “Made In Vietnam” stores supported the local economy and proudly displayed merchandise one would find in the states. This is a surreal change from the concept of goods being imported per the usual American consumeristic pattern and was refreshing to see the local economy being supported in this way. Throughout the entire Old Quarter restaurant and street food carts placed small chairs on sidewalks and prepared food wherever space permitted. 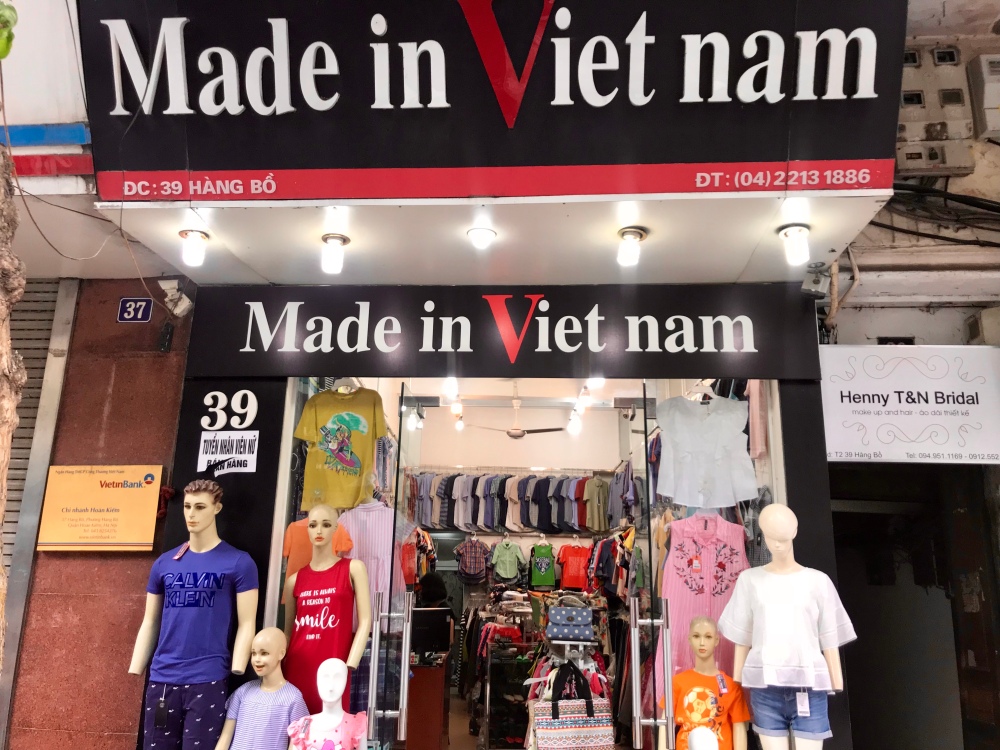 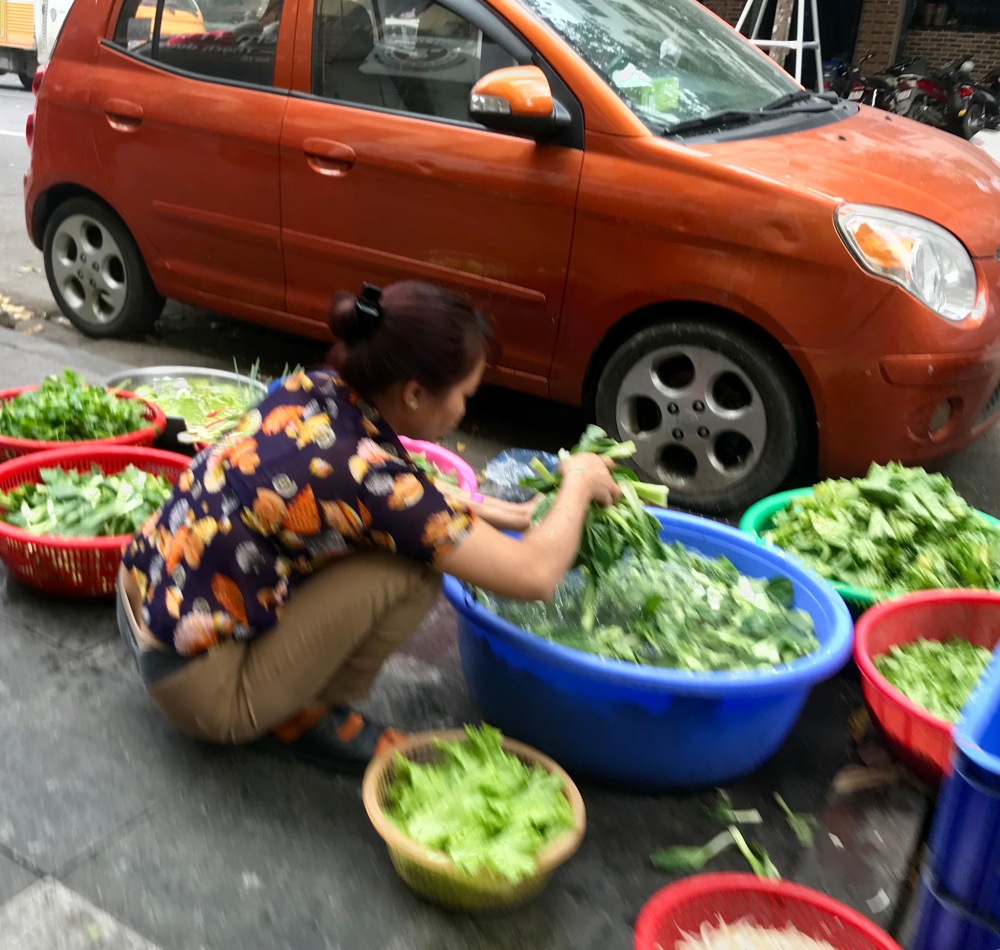 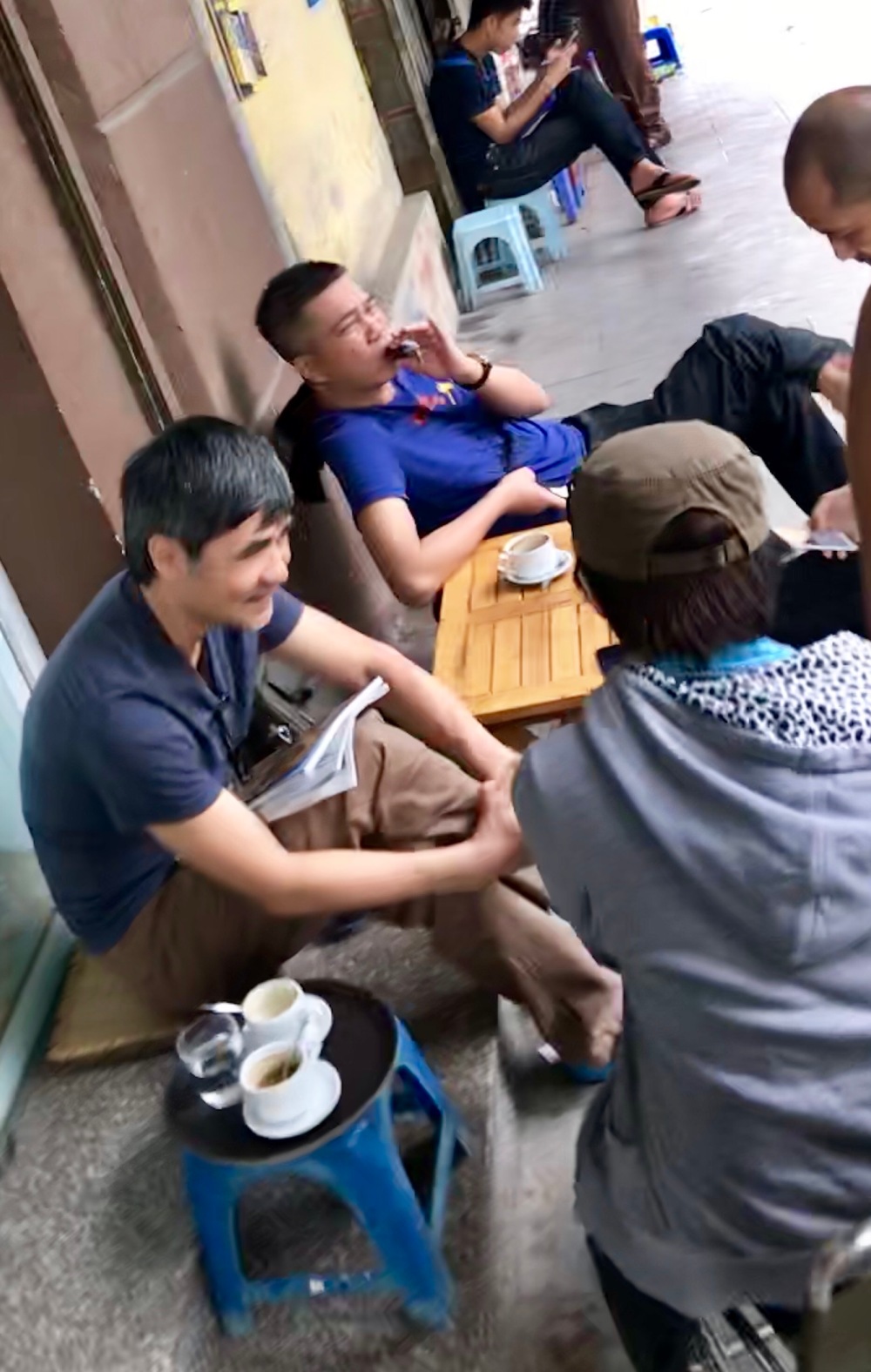 The Hollander encouraged them to eat with the locals for lunch, and they sat on tiny plastic stools on the sidewalk and shared a table with a woman who spoke no English. She dumped her duck bones to the sidewalk as the two foreigners attempted to place an order from a menu. As it turned out, a menu did not exist, and they were simply brought bowls of rice noodles, soup, and a plate of duck. 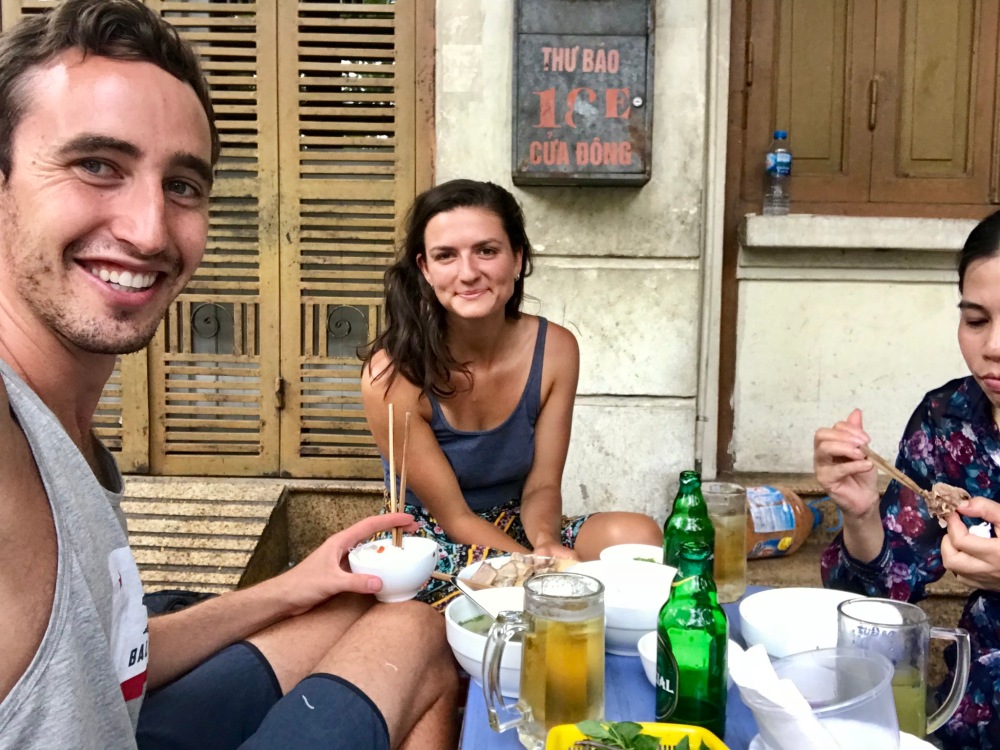 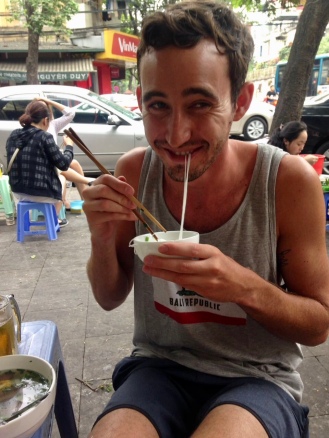 Arriving in a new context simultaneously allowed for the two strangers to bond and create a friendship of substance with memories to match. After walking miles around the city looking for various goods (a tripod for her, a money exchange for him, and comfy pants for them both), they parted ways with a hug and wishes to travel safely.

He walked to the bus storefront to board a nine hour “sleeper bus” of three rows and two levels of mostly reclined seats to Phong Nha. The bus carved out room on the side of the busy road and dozens of foreigners pilled in. Due to motion sickness, he positioned himself in the front of the line with the intention of choosing a seat near the front to avoid the problem. Upon sitting, he was greeted with an angry tone from the bus driver. “You move to back!,” he forcefully said.

“I get sick if I sit in the back,” the Californian responded.

“YOU MOVE TO BACK!,” the driver responded with a fury in his eyes that caught the Californian with such shock that he had to make sure he hadn’t just make a ‘yo momma so fat’ joke.

Miming puking, the Californian said, “I am sorry. I puke in back.”

His eyes wide and voice more aggressive than the average battle cry, ”YOU MOVE TO BACK!”

”I will puke, can I sit somewhere else?”

Needing to handle the line of the other bus comers tickets, the driver resigned to a compromise and made the dirtiest face the Californian had seen made by anyone in years. “Move back more!”

Alone, disoriented, and cramped for room in a seat made for someone six inches shorter, the Californian put in is headphones to escape the madness that was the sleeper bus. The wheels began rolling to begin the journey with Californian sitting fifteen feet behind a man who could muster crazy eyes in mere seconds over seat positions in an unassigned seating bus.** After a few hours, the Californian drifted off to sleep. With only a hostel booked and no further plans, he would soon find out what Phong Nha, the land of caves, held in store beneath the earths surface.

*A country or city that offers free candy upon arrival rautomatic an automatic +1.

**To be fair, the bus made stops along the way to let on locals. It is easier for newcomers to load onto the bus when there are seats avaiable towards the front.