“Reeally?,” the Uber driver and owner of the 2015 silver Toyota remarked. The Uber driver asked him questions about cars and America and prices during the 40 minute drive, oftentimes responding with a genuine “Really!?”

The Californian felt it likely the Uber driver intentionally took a very indirect route to the destination in order to double the fair and double his pay. This tactic of increasing the fair has happened to the Californian before in foreign cities in contexts where the driver prays on the ignorance of foreigners/tourists. Though it initially feels like the driver is a crook, that foreigner did just prove they have the funds to fly across the world and take private transportation for a non-work related journey. So if the Californian was a struggling Uber driver with a family to feed, he would take the same extended route.  That said, the Californian caught the scam and a few taps of the Uber app review ride page refunded a large portion of the fair due to the indirect route.

The Californian popped out of the back seat onto Long Street and crossed the sidewalk, lined with dozens of drummers, to his hotel door. A transient man in a dirty but bright vest rang a button and opened the door and the Californian ascended the stairs to the lobby of The Daddy Long Legs Art Boutique Hotel. The rhythmic percussion filled the lobby, “They do this drumming every Saturday for a couple hours for anyone who wants to join,” the receptionist mentioned.

After sitting the better part of 36 hours, he began walking Cape Town Central. The touristic street felt like any other popular city he’d visited in the US or in South East Asia. Stores had different names and layouts but sold mostly the same categories of goods: knick knacks, art, clothing, food, water, or cigarettes.  McDonalds has French fries and vanilla ice cream. Homeless people begged for money or food or attention. Taxis and trucks zoomed down streets carrying people and goods. 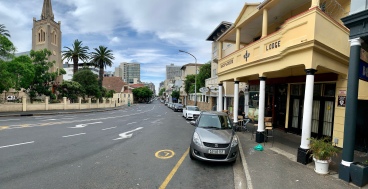 The drummers were still percussing on the sidewalk as the Californian passed. He waited for an open drum and played along for the next 30 minutes, attempting to follow the rhythm of the leader.

Intent to adjust to the time change, at dusk he picked up a takeaway order of kombucha and a margarita pizza to eat in his private room. He passed people sitting or meandering the streets, clearly not going to a home for the night. Carrying his pizza while wearing Patagonia shorts and an Icebreaker Marino wool t-shirt, he passed a man sitting/snoozing on the sidewalk in a dirty blanket. A flurry of emotions swatted his face: Guilt. Privilege. Division. Prosperity. Disparity. He returned to his room, thankful for the literal clothes on his back and the experiences thus far in 2018 and in life.

The clear and blatant inequality he felt and saw was only a precursor for the coming weeks of teaching in the townships where he would work with students living in poverty and/or crime and/or drug riddled communities. 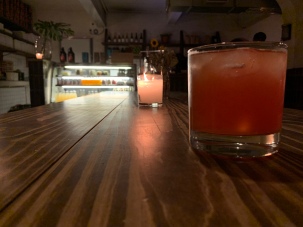